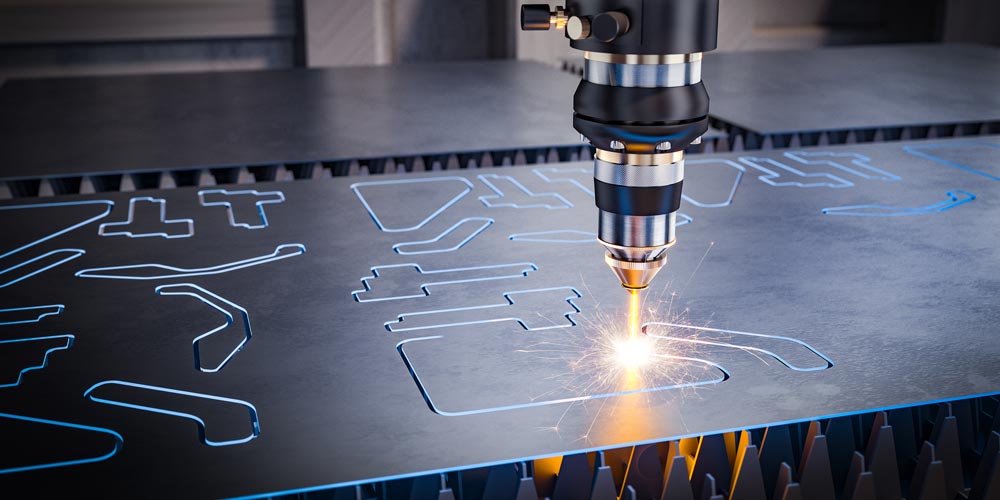 The laser cutting machine has dramatically revolutionized industries and their work efficiency. In many ways, it has changed the landscape of manufacturing and production, making it more streamlined while reducing costs. Undoubtedly, laser technology is now an integral part of many modern machine tools.

Laser Cutting Technology: From Antiquity to the Present Day

The fundamentals of laser invention go back to the 1900s when Albert Einstein conceived the principles behind the “emission” concept. However, the application of lasers was not formed until the 1960s when Theodore Maiman built and operated the first functional laser at Hughes Research Labs in California, USA.

Among the first applications of laser was in the aircraft and automobile industries wherein it was used to cut holes in die-cast aluminum automobile radiator shells. From there, it has since become one of the most popular applications of this technology since its inception.

More than 50 years later, laser technology has advanced considerably in terms of performance, quality, and precision. Manufacturers are now using various types of lasers in their manufacturing processes due to the increased efficiency and precision of the systems.

Laser Cutting Technology: How It Works

Fundamentally, laser cutting is a process that is used to create intricate parts and shapes from metal sheets, plastics, and many other materials. The manufacturing industry has taken a significant step forward because of the development of laser cutters, as it has helped speed up production with its capability of processing materials at a speed of up to 10 meters per minute, depending on the material. Laser cutters are used in a wide range of industries for producing precise, high-quality cuts in a variety of materials. A laser cutter can cut or engrave a variety of metals, including aluminum, stainless steels, and titanium alloys.

Compared with traditional metalworking, the benefits, and advantages of laser cutting are far ahead. In particular, laser cutting makes it possible to create highly intricate and complicated shapes and forms with ease, resulting in precise outcomes that would otherwise be impossible. The laser cut components produced are also uniform in shape and size, as well as having an appealing surface finish. This makes laser cutting technology the most ideal for use in commercial and high-quality precision parts such as airplane and automobile parts, medical devices, electronic components, and many more.

Laser technology has advanced dramatically over time which led to the evolution of laser cutting technologies used in machine tools. There are different types of laser and among them are:

The first laser cutting machines used CO² lasers dating back to the 1960s. CO² is one of the most common gases and it is used for laser cutting processes due to its relatively faster speed compared to other types of laser. A CO² laser generates tremendous levels of power in the form of very brief pulses that are up to 100 times shorter than those generated by other lasers through the use of compressed carbon dioxide as an energy transmission medium. With this capability, it is possible to achieve extremely high cutting speeds.

CO² laser is an excellent choice for cutting through heavy, thick, or dense materials at breakneck speeds because it does not have to deal with material properties such as heat resistance limitations. This allows manufacturers to create new product designs faster. Naturally, this greater power also implies that they have a higher risk potential and must be handled with extreme care. The machine must always be kept in check in order to avoid harm or fire. CO² lasers also have the risk of causing skin burns and eye damage if proper safety equipment is not worn.

Fiber optic coupled diode lasers (FOCD) is a laser with optical fiber interconnect. This allows higher precision and faster processing speeds during the manufacturing process by making the system compact, lightweight, and rugged.

The optical fiber technology can be applied in a wide range of industries including automobile, aerospace, medical equipment, packaging machinery, robotics, and medical devices to mention a few. The benefit of using FOCDs is that they are smaller, lighter, and less costly than other laser cutting instruments.

The FOCDs tend to cause the laser power to be volatile, resulting in a brief pulse laser beam. This will result in poor cutting and welding quality as well as melting it instead of only cutting it. However, this issue can be solved with the use of a low pass filter. The FOCDs can also tend to cause laser power fluctuation. The system will encounter unstable and unpredictable energy levels of the beam when using a single pulse. This might be remedied by upgrading the cooling system for high-power lasers or utilizing multiple short pulses in one cycle to increase laser cutting power.

Fiber lasers have been used since the 1980s and are applied in many fields, including manufacturing, construction, and more, due to their small size and ease of transportation. The beam of a fiber laser may be adjusted to be continuous or pulsed.

Fiber laser bars, which make use of diodes to generate electricity, is another form of a new laser technology on the rise.

Bellows  are covers used on machine tools to protect the moving parts of the machine by preventing debris to jam the linear guides and to protect the operator from harm. Laser cutting machines add another hazard to the mix by generating sparks and fire that can ignite any material that hasn’t been properly fireproofed.

The risk of fire can be very high if the laser cutting machine is not isolated properly. Each type of machine and even applications within the same machine have different specifications that require different types of bellow cover. Keeping a laser cutting machine safe from fire will depend, in part, on the selection of the right type of cover and the right flame resistant material.

Otego’s bellow fabrics for laser cutting machines are designed to be not only fire and flame resistant, but also extremely durable to mechanical strains to avoid a premature apparition of pinhole issues at the folding cross-sections. Made of high-temperature resistant PU, it can be welded using HF or high temperature welding, easily folded, and has an exceptional mechanical strength that ensures a long service life. Our PUR-coated fabrics also come in a variety of thicknesses and resistance levels to fit any type of machine requirement, from fire retardant to flame resistant.

Contact us and learn more about our bellow fabrics for laser cutting technologies.

The Covid-19 Pandemic at its height was unprecedented in scope and scale. The entire world…